Ice caps and glaciers hold over sixty-eight percent of the fresh water, and groundwater comprises just over thirty percent of it. Only about 0.3 percent of our freshwater is found in the surface water of lakes, rivers, and swamps.

While the amount of accessible freshwater is nearly constant, the human population and demand for water is increasing exponentially, resulting in increased pressure on the planet’s limited freshwater resources.,

Freshwater sources, such as lakes, rivers, and groundwater aquifers, are at an increased risk of contamination by agricultural and storm runoff and industrial waste. Therefore, reducing household water use and encouraging other conservation habits is vital to ensuring safe and accessible water for all populations, decades to come.

According to the United States Geographical Survey (USGS), the public water supply is the third largest use of freshwater in the United States, trailing only withdrawals for irrigation (2nd) and use in thermoelectric (1st). In 2005, the total freshwater withdrawal rate for public supply was 44,200 million gallons per day. 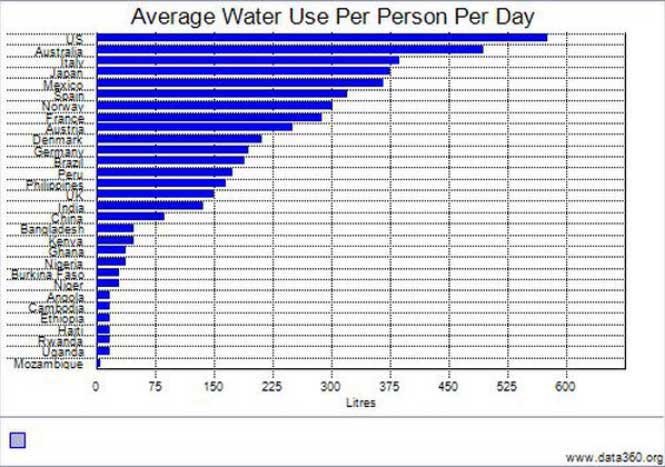 The United States has around 4.5% of the world’s population and 8% of available freshwater resources. The average American uses 156 gallons (~590 liters) of water per day. As the table above shows, our per capita water use is much higher than most other major industrialized nations. By comparison, the average resident of the United Kingdom uses significantly less than one-third of the water used by the average American.