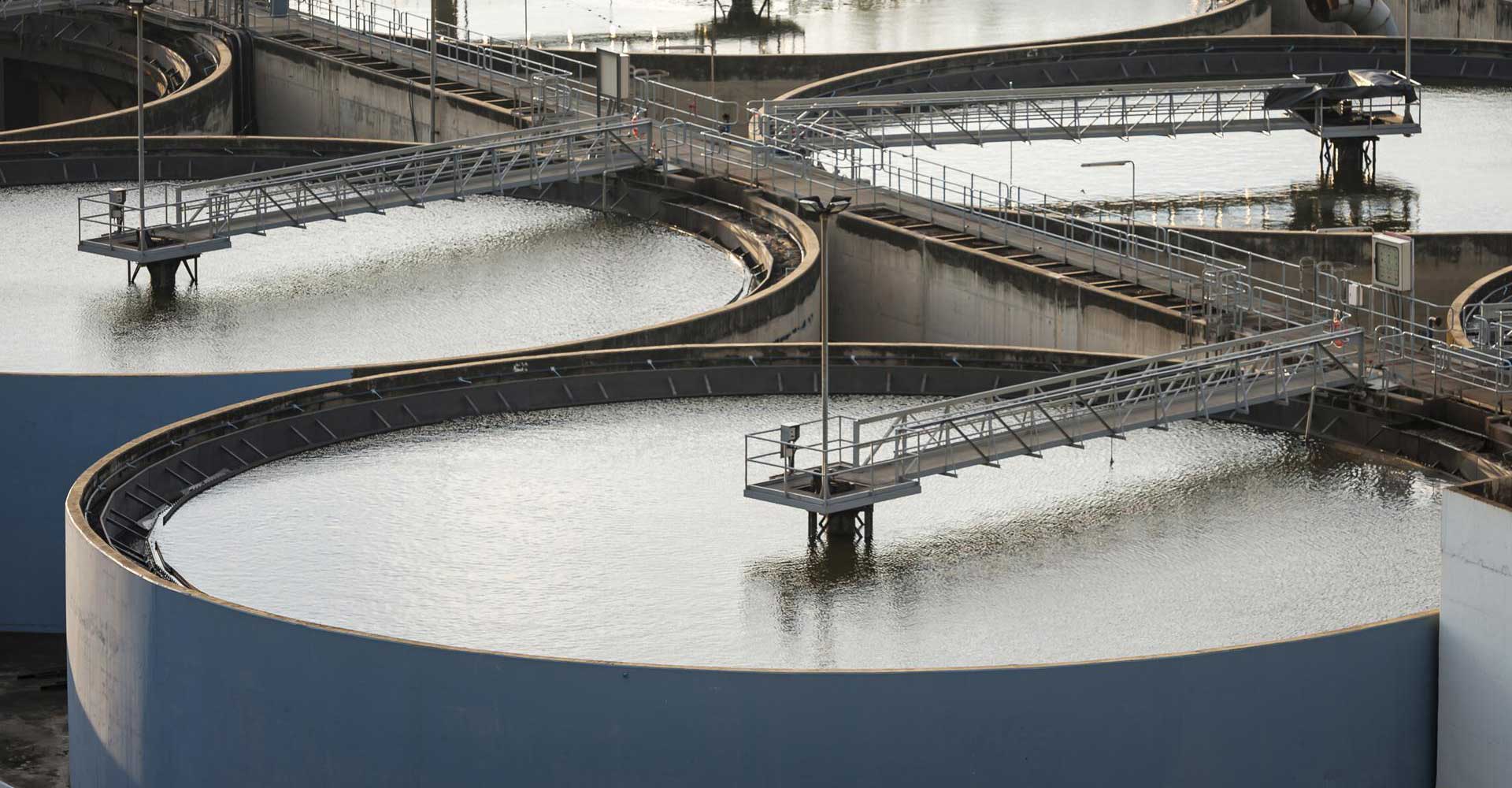 Upon initial pumping, a screen is often used to remove large debris from the raw water before it enters the water treatment plant. Large debris, such as leaves, could clog the water treatment units, therefore must be removed to maintain efficient water treatment. These screens must be cleaned periodically as built-up debris can reduce or even block water flow. 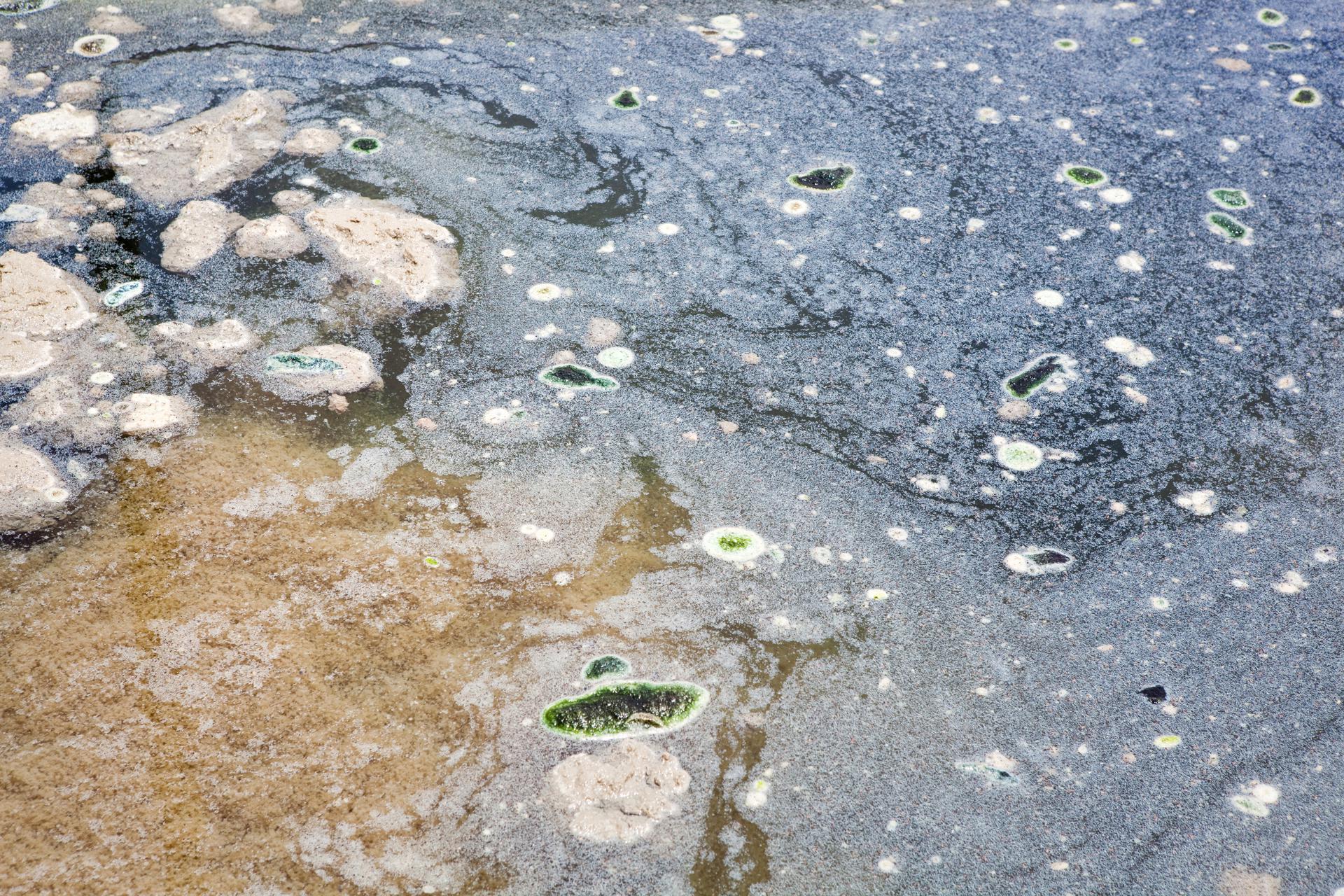 During coagulation and flocculation, positively-charged concentrations (coagulants) are added to the water which attracts negatively-charged particles, such as dirt and certain dissolved chemicals, which are suspended in the water. The most commonly used coagulant is aluminum sulfate (or alum) although other aluminum and iron salts can be used as well.

Immediately after the addition of coagulants, the water is mixed rapidly to efficiently and thoroughly disperse the coagulants throughout the water. Then, the water is mixed slowly as the small suspended particles are neutralized and bind together forming larger particles, called flocs. Another chemical (polymer) may be added to increase the speed of floc formation and create heavier, more stable flocs.

Turbidity is the measure of the relative clarity of a liquid. This optical quality can be impacted b high concentrations of particulate matter affecting light penetration and productivity, recreational values habitat quality and cause lakes to fill faster.

Suspended solids that are small enough to pass through screens, but that are denser than water (such as sand) can settle out of the water in sedimentation tanks. Flocs formed during the coagulation and flocculation step also sink to the bottom of the tank during sedimentation, removing smaller, soluble particles that may not settle out on their own. Once solids have settled at the bottom of the tank, they are removed and discarded. The water, now clearer and cleaner, flows onto further stages of treatment. 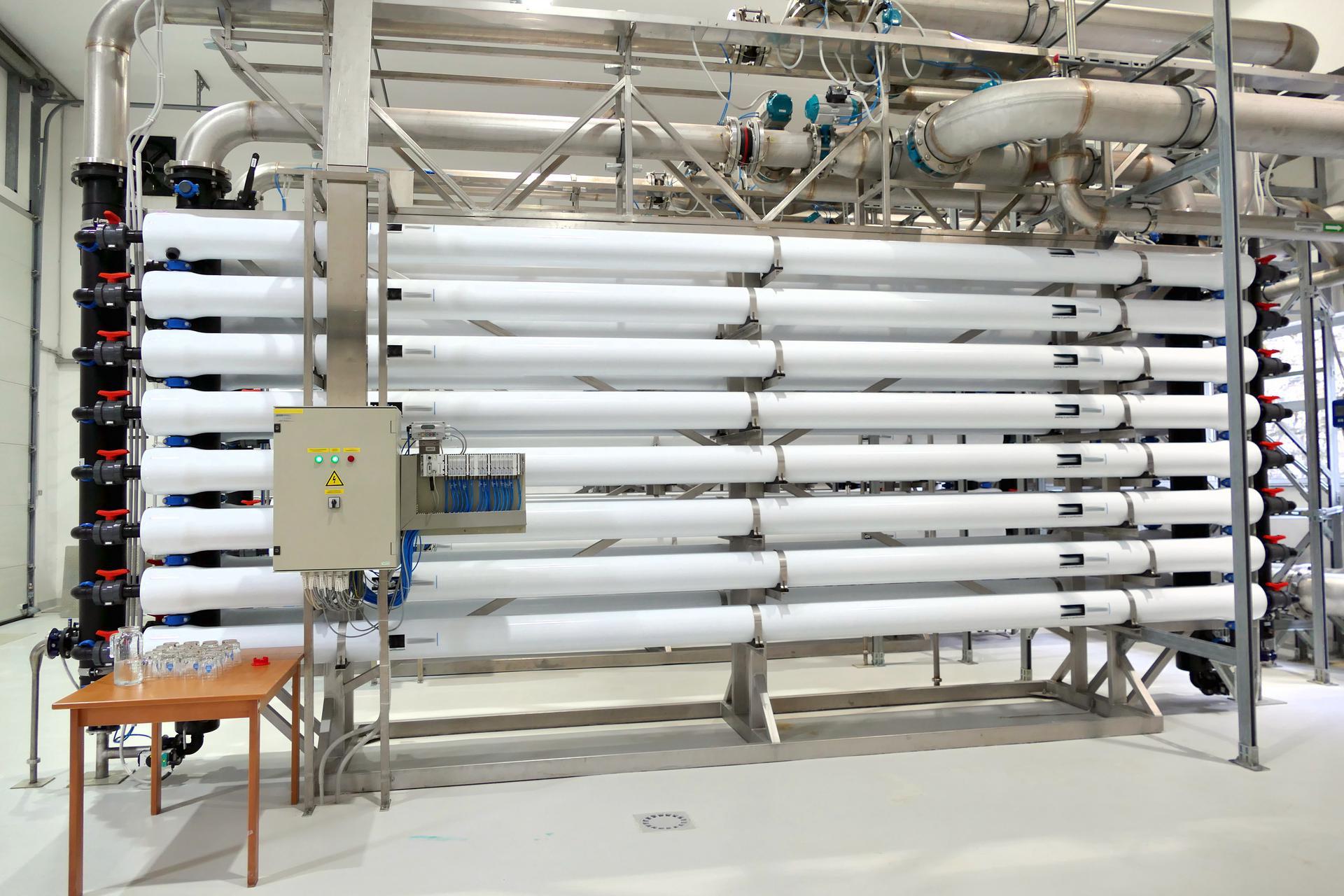 Filtration physically removes suspended solids from water by passing it through pores smaller than the suspended particles. There are several types of filtration systems, but they all work by employing a system similar to the one described above. These various filtration systems include:

Granular media filters rely on one or more granular substances to create stratified layers of pores through which the water flows. Commonly used media includes sand, anthracite coal, and activated carbon. It is generally layered from coarse to fine so that larger particles are filtered out first. Depending on the media used, inorganic contaminants, such as iron and manganese, and organic compounds may be removed.

Membrane filtration systems use thin sheets of material which use particle size or charge to remove hazardous or aesthetically displeasing chemical and biological contaminants. Common types of membrane filters include membrane cartridge filtration (MCF), microfiltration (MF), ultrafiltration (UF), nanofiltration (NF), and reverse osmosis (RO), which are listed in order of decreasing pore size. MCF can remove large pathogens, such as Giardia and Cryptosporidium. MF and UF can remove turbidity, small particles, and some pathogens. UF can remove viruses, while MF does not. NF removes the same contaminants as UF with more efficiency while also removing dissolved organic compounds. RO are the densest membranes and removes almost all inorganic and organic contaminants (including salt) with the exception of the smallest organic molecules.

The most selective filters, such as NF and RO, can become clogged (or fouled) relatively quickly as contaminants build up on the membrane surface, therefore and must be cleaned often to maintain effective filtration. NF and RO also produce a relatively large amount of wastewater (up to 15% of the total water volume) compared to the less selective membranes.

Disinfection, often the last step of the treatment train, occurs right before the drinking water is distributed to consumers. The goal of disinfection is to reduce the number of active pathogens in order to prevent waterborne disease. The effectiveness of disinfection is measured by the presence or absence of coliform bacteria in the final, filtered product. In general, coliforms are not pathogenic themselves but act as an “indicator organism” as their presence indicates possible contamination by pathogenic bacteria. In order for water to be considered potable, there should be a complete absence of coliform in every sample taken from the distribution system.

Sedimentation:
The process of deposition of a solid material previously suspended within a fluid (usually air or water) (Britannica.com).

While chlorine is effective at inactivating most bacterial species, viruses are harder to treat and require higher dosages of the chemical. In addition, some microorganisms (called protozoan) form hard shells (cysts) which are resistant to chlorine treatment. These cyst-forming organisms include Cryptosporidium and Giardia.

In addition to inactivating microorganisms, chlorine may also react with other chemicals present in the water, resulting in the formation of disinfection by-products (DBPs). One class of DBP called trihalomethanes (THMs) are suspected carcinogens. In an effort to lower the presence of THMs and other DBPs, only the minimum dose of chlorine needed to inactivate organisms is added. Additionally, activated carbon filters have shown to be effective in removing chlorine, chloramines and some disinfection byproducts.

Monochloramines, which are more stable and longer-lasting, are less likely to form harmful DBPs.

Carcinogen:
Substances and exposures that can increase one’s risk of cancer, through prolonged exposure or consumption (cancer.org) 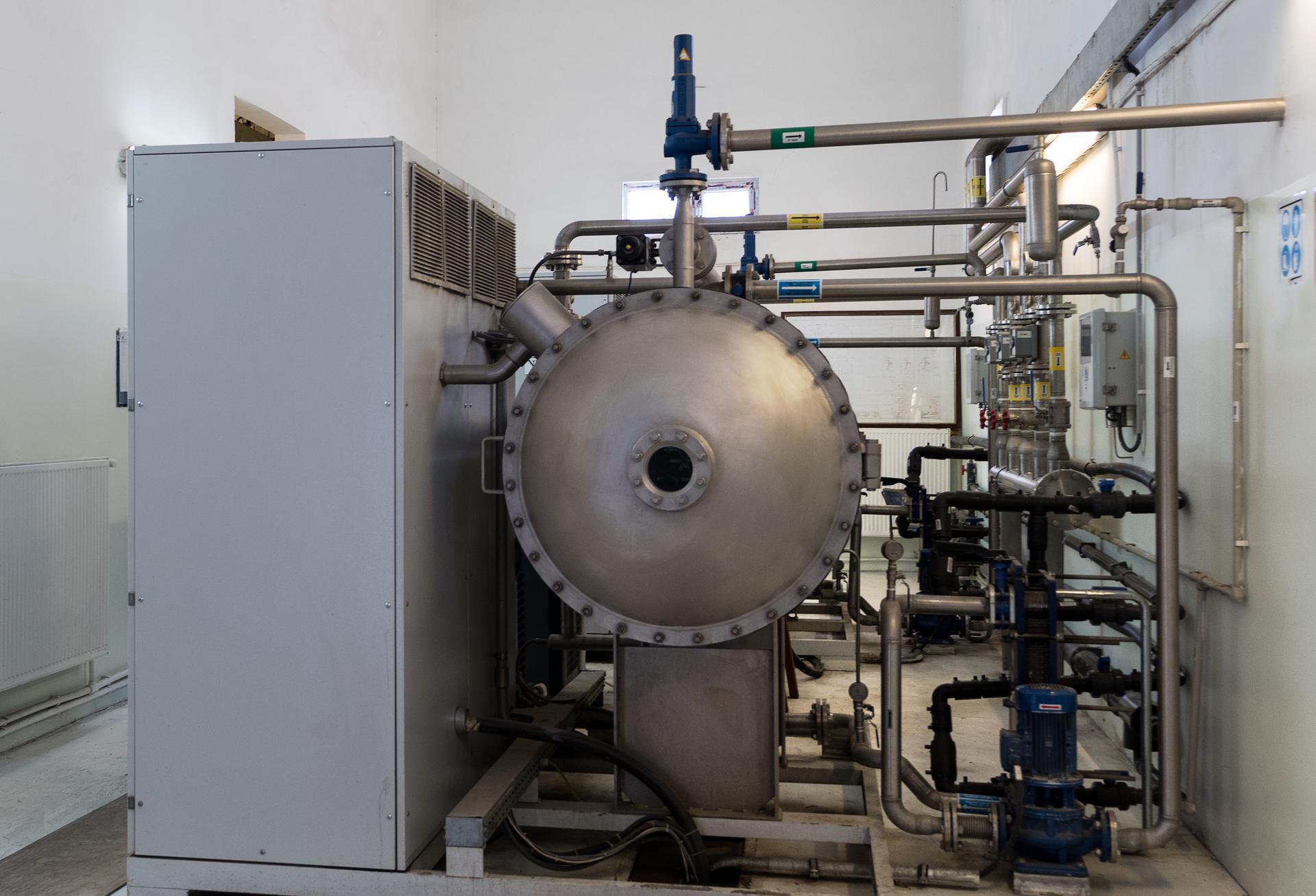 Ozone (O₃) is a very effective primary disinfectant that inactivates a wide range of organic molecules and microorganisms, including Giardia and Cryptosporidium, which chlorine struggles to inactivate. Ozone is also a powerful oxidizer and can remove some inorganic chemicals, such as iron, sulfur, and manganese, that may negatively affect the taste of the water.

OzoneThe ozone used for disinfection is created from oxygen at the treatment plant. Once it is mixed with the water, it quickly converts back to oxygen, so it can only be used as a primary disinfectant as it leaves no residual ozone in the distribution system. Ozone does not add any unpleasant taste for the same reason.

Undesirable by-products, such as bromate, are a concern with the addition of ozone as they may be harmful to human health.

Currently, ozone disinfection is uncommon in the United States as the process is infrastructure intensive and can be expensive to operate. However, the popularity of ozone systems is increasing as concern about chlorine by-products grows.

Ultraviolet light (UV) is part of the electromagnetic spectrum and can be used to inactivate microorganisms in drinking water without the addition of chemicals. In order for UV to effectively destroy microorganisms, the water must be clear enough for the light to clearly penetrate through the entire water depth. If the water is cloudy or contains a high number of particles, the water must be further treated to remove the particles, often through filtration or sedimentation.

Since UV is a one-time treatment, it can only be used as a primary disinfectant, and chlorine or chloramine may be added for secondary disinfection.

Compared to chlorination or ozone disinfection, ultraviolet light is relatively simple and affordable with minimal infrastructure requirements. Although it is not extremely common in Michigan, a number of treatment plants do use this method.

BACK
NEXT: HOW CAN I EVALUATE THE QUALITY OF MY DRINKING WATER?